The 2022 OVA Coaches of the Year goes to two KW Predators leaders who have had an incredible indoor season - both helming teams to the gold medal match at OCs and dynamite performances at Nationals to boot with gold and bronze medal placements. 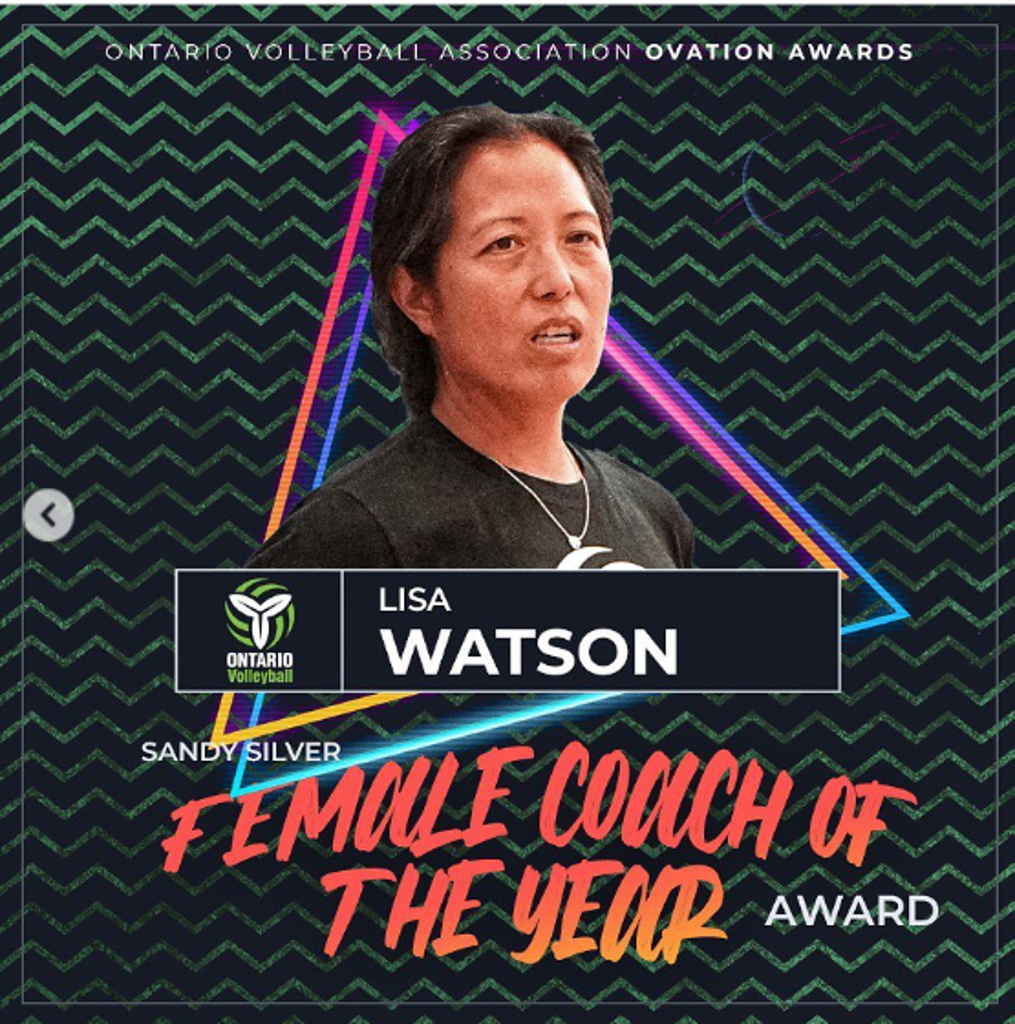 The Ontario Volleyball association is proud to present the 2022 Sandy Silver Award to Lisa Watson of the Kitchener-Waterloo Predators Girls 18U Synergy.

Lisa Watson, along with Dave McIntyre and Trevor Francis, started the Synergy team as 8-9 year-olds in 2013 and has coached the athletes through their development, COVID stoppages and onto the national stage. This group of young women have spent nine years under Watsons watchful eye and in 2022 won a third straight National Title. A 14U National Title in 2018 and 15U National Title in 2019, only the pandemic was able to derail this powerhouse of a team. Most of this team is done at the club level and have already committed to playing at USport level or in the United States. There are also a handful that have been chosen to represent Ontario and Canada U19 and U21 teams.

On top of her role with Synergy, Lisa led the 15U KW Predators Momentum Team to 5th at Provincials, was the Head Coach for Team Ontario Black, Assistant Coach with Team Ontario Elite, a guest coach with Team Ontario for Canada Games and a Mentor Coach at TORP. This reads as a career resume, but Lisa has somehow rolled it into one very busy season.

Lisa is highly regarded within her club and McIntyre shared his own thoughts on her as both a coach and a person. “Our partnership coaching these two teams over the last nine years together has been one of the most rewarding and joyful of my coaching career and my life in general. None of this would have been possible without Lisa. Her friendship, her support, her knowledge is invaluable to me and the experiences we've had coaching these two groups (Ubuntu and Synergy) both together and separately, as I said, have been incredibly memorable. Her dedication to her players and the sport, her completely unselfish nature. She is the right mix of loving and demanding as a coach that she gets the most out of, not just the most out of her player, she gets the most out of everybody around her. Whether it's assistant coaches, whether it's other coaches, whether it's club executives, referees, she is incredibly motivating, and I think she's able to do that because people understand that she loves what she does. She loves the people she's dealing with, and I think people innately sense that about her from parents to players to everybody. There's so much I could say about Lisa. None of this would have been possible without her. Nothing.”

She believes it is her passion for learning that has helped her get where she is but having other great coaches around to soak information out of helped develop her knowledge. Watson noted Paul Paven, Kelvin Hui, Dave McIntyre, Steve Clinton, and long list of Team Ontario coaches she has worked with have helped her become the coach she is today.

Lisa was very quick to credit the Predators Club and its members in helping her achieve this award. “I think it's a great testament to our club and the support that they have for us as coaches and then the kids as athletes and the holistic approach of our club. So, it would definitely be about that. But you gave me the best news of the day. That Dave is getting it (Men’s Coach of the Year Award) and I get to stand beside Dave, I couldn't be happier to stand beside another person.”

Watson plans on continuing with developmental coaching roles for the foreseeable future. “I love what I'm doing, I mean, I don't know if post-secondary volleyball is where I need to be or I don't think it is. I think my strength lies in development. I hope I'll always be a part of coaching volleyball and mentoring or just being in and around the sport.”

Congratulations Lisa on the Coach of the Year Award!

The Sandy Silver Female Coach of the Year Award is presented annually to an outstanding female coach for her success in the previous season and for her contribution to the development of our sport in Ontario.

History: With selfless dedication and unwavering leadership, Sandy Silver has prevailed for more than 40 years as an outstanding athlete, volunteer, coach, mentor and administrator. A major contributor to female sports reaching increased levels of funding, social advancement and acclaim, Silver’s steadfast dedication to her athletes and to gender equity continues to be inspiring both nationally and internationally. Silver’s coaching positions have included Seneca College, York University (CIAU silver medalists), UBC (CIAU bronze medalists) and Assistant Coach for Canada’s National Women’s Team. Sandy Silver was inducted into the Builder category of the Volleyball Canada Hall of Fame in 2013 and we’re proud to claim her as one of Ontario’s finest! 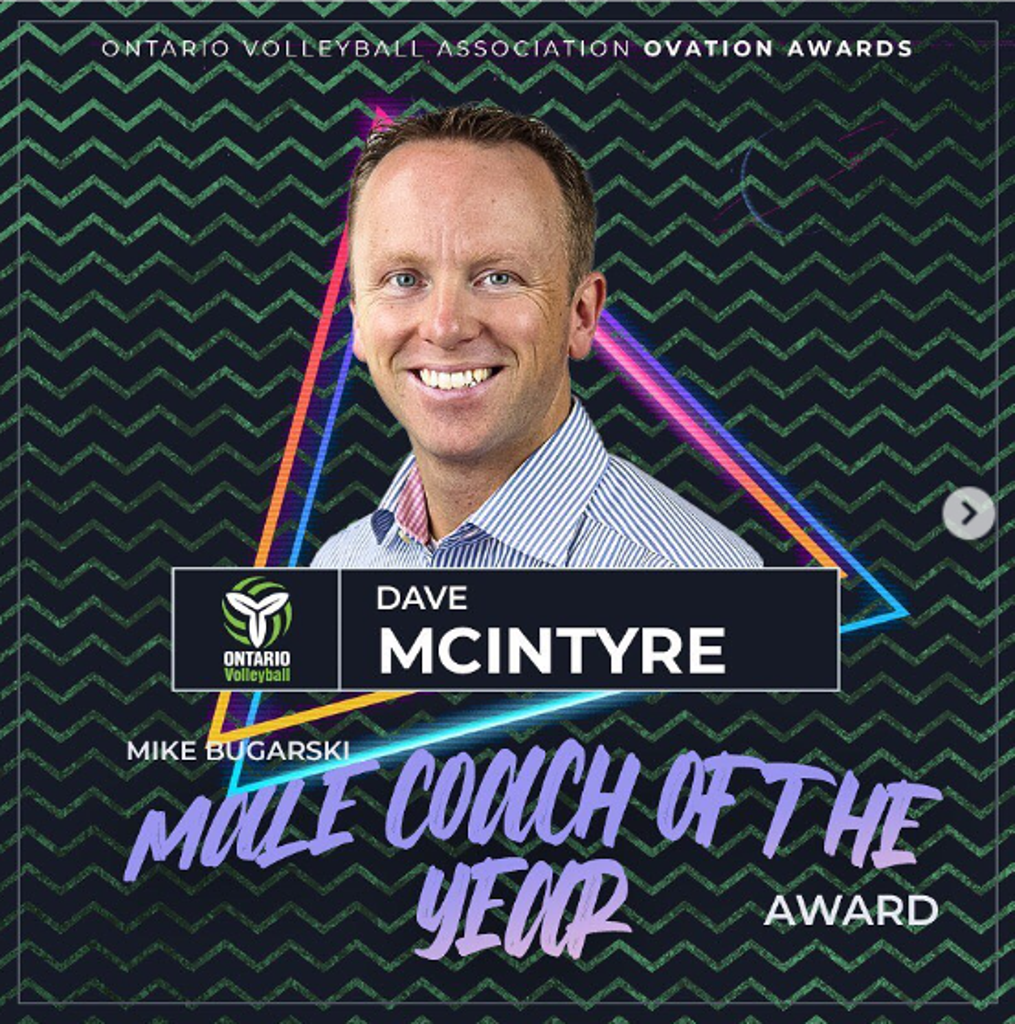 The Ontario Volleyball Association is proud to announce that Dave McIntyre, head coach of the Kitchener-Waterloo Predators Volleyball Club’s 18U Boys Ubuntu, is the 2022 recipient of the Mike Bugarski Male Coach of the Year Award.

In 2013 with the help of Lisa Watson and Trevor Francis, McIntyre started a team of 8–9-year-old boys and girls. This team would eventually split into Synergy (girls) and Ubuntu (boys). While they were two distinct teams, they are bound by a joint beginning and continue to practice together right up until the Ontario Championships. This season Ubuntu improved on their 2019 silver at Ontario Championships by taking home the championship. At the National Championship they came away 11th of the 32 participating teams.

For Dave, this award is representative of the journey his team has gone on together. “I feel very strongly that this is not an award for Dave McIntyre, it has very little to do with me,” says McIntyre. “I understand you have to have a name attached to it, but that it’s a recognition of the principles of the process that that we that we went through for nine years and that this award I look at it as a culmination and kind of the cherry on top of what has been one of the most rewarding experiences of my whole life.”

His passion for the game and development of his athletes is very ever present when discussing volleyball. “As I've gotten older, being around younger people and the energy, definitely feed off that that energy and I love that component of coaching,” said McIntyre. “I love the technical aspect of volleyball and working with players. I love the challenge that every player is different and no one thing works for everybody. And I love that challenge that you know what might work for one kid and one athlete with a serve receive, it might be something completely different and finding that thing that connects with them that works for them.”

This is the final year for most of Dave’s 18U athletes and almost the full team have committed to play at a higher level all across the country and into the States. Following their final game, the Ubuntu players gathered and held what Dave describes as his most memorable moment of the season. “After we lost our last match at Nationals, watched our girls play who ended up winning nationals and then we went back to the hotel,” said McIntyre. “And had a meeting and we had a gratitude circle at that meeting and that was maybe the most powerful coaching experience I've ever been part of, to listen to those guys talk about what they're grateful for. A bunch of those guys, we've been together for nine years with this team.” Having promised to visit each and every one of them to see them in action, he was reminiscent about his first athlete to play at the next level. “It was actually a very emotional experience watching him play and be on the court. I loved not having to aid and not being a coach, but being a fan felt great. That I could just be a fan of his.”

McIntyre credits his high-school coach Russ Woloshyn as one of his earliest and most notable influences in the game. Five years under his wing as a player, Russ would eventually help get him a job coaching at Laurier. The two still meet up a couple times a month to chat and bounce ideas off one another.

On advice for other coaches, McIntyre impressed that values helped hold his teams together. “Have a set of principles, so things that matter most to you as a coach, and then convey those to your players and then make sure that every action, every reward you give, every piece of feedback it complies with those principles,” explains Dave. “The principles can change over the years, but practice what you preach to them.”

Dave plans to take a short break from coaching and spend part of the year visiting his former athletes when they play around the country before reassessing his next coaching role.

Congratulations Dave on your award and the best of luck in your future coaching endeavours!

Presented annually to an outstanding male coach for his success in the previous season and for his contribution to the development of our sport in Ontario.

History: Mike Bugarski (1936-1992) was a club coach, National Official, Provincial Official’s Chair, clinician, and high school coach. He was a volunteer that unselfishly contributed thousands of hours to the development of athletes and leaders in the sport for more than two decades.